This week I’m off to the Association for the Study of Literature and Environment (ASLE) Biennial Conference in Moscow, Idaho to present on a curriculum I developed and will be teaching next year. The curriculum is for a class called Missouri Literature and Comp – a place-based learning English class where students will be engrossed with learning language arts in a non-traditional setting. I’ll also be traveling to Portland, Oregon during the week to see my brother! I’ll post some fun things this week that I did.

Summer is finally here. May my travels commence, may the next five weeks go slowly (in a good way), may no one die I’m traveling with or visiting (literally or figuratively), let me bring home amazing tales and souvenirs and photos, and let my dog still be living and my house still stand upon my return. Amen.

This weighed too much! So I unpacked and repacked it about 500 times to make it work. I also found out my pack had a built in splint/sleeping mat/chair called a BFF which stands for something like big, freakin’, fat pack that weighs too much. On that note, time for bed.

Stayed up at the parents’ house last night and woke up bright and early to catch three flights. I did sleep approximately 3 hours on 2 of the flights. Not too bad since, as you can see, my view on the first flight was obscure. How was I supposed to see if we were crashing? Right… the engine by my head would be on fire. Nevermind.  I also have quite the head cold/runny nose… yuck. As long as I have a voice to present tomorrow, I’ll be happy!

For those of you who speak airline: MCI – DFW – PDX – GEG. Let’s just say I love Portland and their airport! I’m thinking about retiring there. Yeah, in the airport. It has it all. Spent my three hour layover listening to live music and checking out their amazing shopping (food carts and farmers’ market IN the airport) and watching the beautiful cuckoo clock. Oh and the effing carpet, as my brother calls it. It’s world famous—like was the grand marshal of a parade famous. I can’t make this stuff up. I took shoe-selfies because everyone is doing it. #PDX #PDXcarpet

He says Nike now sells shoes with the design on it. Capitalists.

Check out this clock in the airport in Portland!

And complimentary wine in a plastic cup on Alaska Airlines? Sure! This was a smooth red blend.

Before I talk about today, when I was at the airport last night waiting for Brit to land, a young gal walked past me and asked, “Are you waiting for the shuttle?” I explained I had no clue there was a shuttle before she asked then if I was off to ASLE. I was. Within 30 seconds I offered her a ride with us. I usually don’t do such things for strangers, but she seemed doe-eyed and not the gun on an airplane type. I think Brit was dying inside when I told her, but she was too tired to put up a fight… ha! Later on the gal confessed this: “I saw your running shoes and your bright blue pack and thought AH! You’re off to ASLE!” I’m not sure how those two things fit together, but hey, whatever! 🙂

Everything went as smoothly as it could. I woke up around 4:30 local time and captured the sun rising before hitting the pavement for a run at 6. I ran all around town and up into the residential areas. You’ll see in one of the photos below a very strange set of yard ornaments I “ran” across.  The weather was in the 50s so I was a happy runner today! We then registered and attended a few sessions before presenting in the afternoon. Our audience was fantastic (15 people or so came, as well as a service dog), and it was fun sharing all I’d been working on. Here is our presentation: https://docs.google.com/presentation/d/1e7MJD-vQevvg3YxYlHvXRPLmMXvOFPDwMDE-ojBngRY/edit?usp=sharing

I also tried to win a creative writing contest for the conference, but didn’t win. Here is what I wrote:

Along with the conference, we took some time to see the downtown Co-op (and eat lunch there) and had wood-fire pizza for dinner at a local Italian joint. Tomorrow I leave bright and early for Portland for a few days to see my brother. Currently I’m icing my knee as it is really hurting and can’t figure out why. I didn’t hurt it today on my run. I’m praying it is NOT what I think it is. Otherwise, I’m not sure how I’m going to do Europe… I really need stop consulting WebMD.

I flew to Portland bright and TOO early this morn. Caught a great shot of Mt. Hood from the plane. The lady I sat by on the plane was a total witch, well, at least according to her body language. She was totally repulsed when I sat down–quickly grabbing her book, neck pillow, and something else as soon as I sat. She then made sure to stake her territory by stealing the armrest PLUS some of my bubble. Which, hey, whatever. I don’t mind touching someone. Or cuddling. Okay, so not with strangers. And not with strangers on an airplane.  She did manage to “bump” me multiple times in flight, again, seemingly marking her spot and acting annoyed. Here is the truth: I didn’t even talk to her!!! No small talk, conversation, NOTHING. Oh well. She missed out on how awesome I am. Hehe. I’m kidding. I read my book and can I just say WOW? Such a harrowing account of the Auschwitz camp. I almost cried reading it today as the woman spoke about what happened to newborns.

Upon arrival into Portland, we then headed to the outlet stores to shop then up to the Rose Garden and Japanese Garden.

Woke up at 5 am local time like a champ and went on a morning run. 6.3 miles this morn and 6 last night. Here are some shots of the running trail: 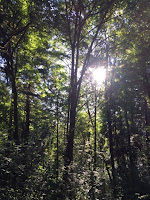 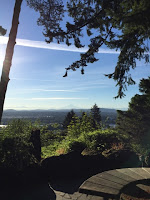 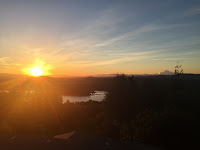 And a nice shot from my brother’s balcony.

We then headed to to Tillamook cheese factory and the Cannon Beach coastal area for the day (Goonies anyone?!?). We ended up actually stopping at Seaside to shop and see the ocean even as it was 60 degrees. 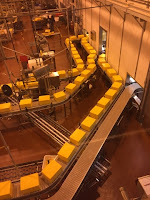 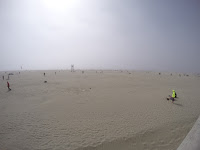 The beach was super cold, windy, and foggy! 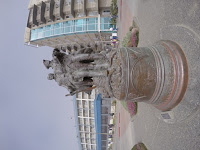 End of the Lewis and Clark trail 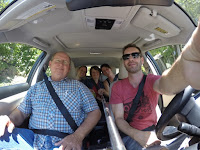 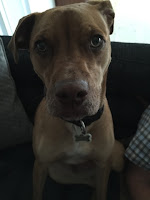 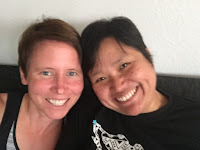 My friend Princess came up to see me! It was great to see Princess. We had burgers and played games: Smart Ass and Wits and Wagers. Lots of fun! 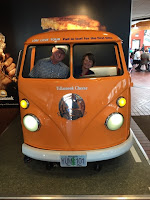 Mom and Dad at the cheese factory

Nailed another 6 mile run on the path and am quite tired today! I figured out today that going down on parts of the trail I have a 6:36 pace but coming up the same steep ones, an 11 min mile pace. Oops! At least it was shaded and pretty!

We then ventured to the Portland State Farmer’s Market where I tried a lot of samples and Princess and I shared a lemon white chocolate cookie. The Portland Saturday market was also open. I bought some new earrings and two t-shirts before heading to Title Nine for some new swim bottoms and bras (things that are needed when you lose weight!).

My family didn’t want to wait for me and Princess to shop for us all to eat lunch but after a small tiff I did eat at a local place I can’t remember the name of. So annoyed. Oh well! 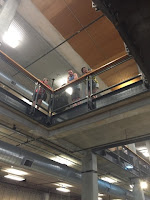 Mom, Shawn, and Princess at REI trying to get a picture of a guy with a funny suntan line on his head

Murphy wanted me up from my nap

Murphy loved playing with a laser light. Too cute! 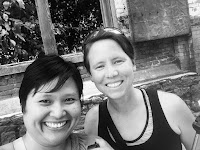 Shopping in the Pearl District.

Quote of the week? I forgot to post this one yesterday!

“This is a Mecca of weirdness” – dad talking about the Portland Saturday Market. 😂😂😂

It really isn’t too weird. It’s very artsy, though.

Sunday morn I woke up and did another 6 mile run. I walked a lot. I was super tired this morning–more than the other days. Then we went to church. Can I just say I HATE going to church on vacation? My introverted self dies a little inside when my very traditional parents feel like it’s necessary to go to church every single Sunday of their lives even when far away from home. I’m pretty sure they have perfect attendance for life. We did go to this one because of a co-worker of my brother’s–her husband is the pastor.

We took a small afternoon trip to Latourell, Wakenna, and Multanomah Falls. 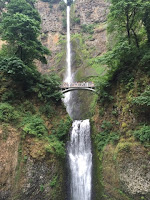 Multanomah Falls – too many people! 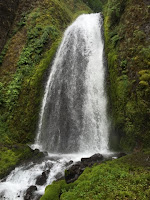 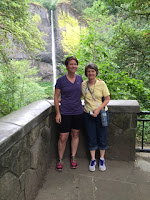 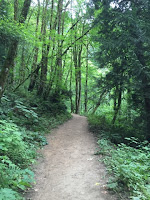 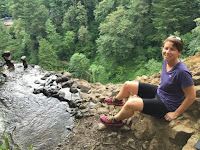 I’m on the edge of a 250 ft waterfall! Latourell Falls. 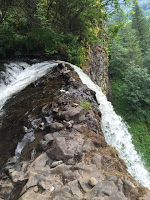 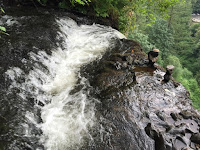 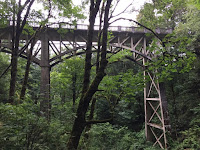 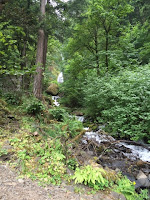 Pano shot of the trail near the top of Wakeena Falls 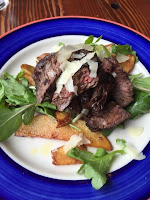 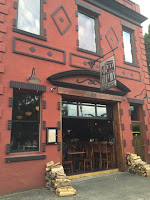 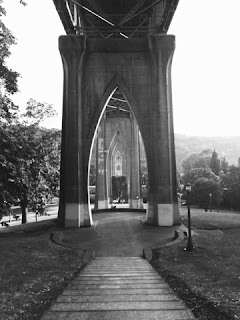 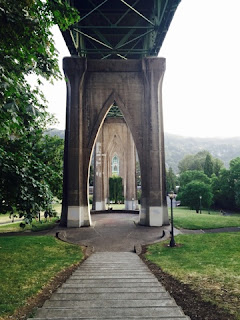 Woke up early to run 5 miles before I left. What a day. Rough. I apparently booked an incorrect time for my return flight. No prob. A nice attendant helped me get an earlier flight for a $25 fee. Once I arrived in Spokane I went to get my ticket only to find out I should’ve stayed in the same terminal. I tried to make the flight and missed it— the kind of missing the plane where you can see the plane sitting there and things aren’t quite all closed up yet. Bursting with tears, I got a ticket for the next flight, of which I had 20 min to RUN –and when I use that word I mean it to its full capacity— from Gate A to C17. I made it in 5 min dead sprinting the terminal with my 40lb monstrosity of a backpack (which still needs a name, by the way). I made it. And then had a two hour coughing attack. Not good.

On the plane I sat by a kind 88 year old man named Joseph and his wife of 1.5 years. Both were widowers after 60 and 53 years. They were on their way to a church conference in Milwaukie. For the two hours I heard of his love for the Bible, his family, and words of wisdom he was passing along such as to pray believing and find your gift and read the Bible. I’m not sure if he was preaching to me or just speaking from his heart. You never know with 80-year-olds! They say what they want. I also heard how he loved the movies “The gods must be crazy” and “The Parent Trap”— two movies I’ve seen! And how his wife was gluten-free and he was dairy-free. His wife was hilarious– telling him he was gabbing my ear off and to let me sleep. He then said to lean back and I could lay my head on his seat so it would be comfortable. Too cute!

My last leg was to Kansas City, which was 10 min late on top of having to wait forever for the shuttle, then the drive home. Can you say beyond exhausted??? I am. My back hurts from running with a pack on. Feels like the last 6 months of running and lifting prepared me for that 5 min, though. HA! And my face hurts from crying. Oh well. Tomorrow is a new day with new adventures and a clean slate.

Follow my blog! Copy this link, then fill out the form!